Martin was walking to the patio when out of the corner of his eye he sees Andrew in the back bedroom that use to be Elatia’s bedroom and where Kaliana use to nap as a baby.

Normally that door is shut, so Merlin, my co-dependent wiener dog doesn’t have a party of his own back here. But Kaliana wanted to go in there today to sit down and listen to her sing to me her new rendition of Rudolf the Red Nose Reindeer, where apparently he broke his ass. Here’s me wha??

But I allow her to finish her song trying not to laugh and then explain, while trying to keep a straight face, that “ass” isn’t a word she should be saying. She just smiled at me with a glint in her eye that she already knew that. But of course what happens at Maymee and Daba’s stays at Maymee and Daba’s…well, and possibly Maymee’s blog.

Her and I were sitting at the little table where Martin will occasionally do readings, so there were 2 oracle decks on the table, one being Steven Farmer’s Earth Magic deck, not sure who the other one belonged to. I picked a card from Steven’s deck and thought, “Yeah, not surprised I picked that card.” It was the Green Man card, which is also Hern. Andrew loved his Hern! So I knew it was from him. BUT it was just the beginning of the message! Hern is also Martin’s name on the commercial psychic line he reads on.

Kaliana then made me turn on the blue string of lights I have hanging in there, as well as the faerie light because she wanted to get on my treadmill. She is fascinated by my treadmill. There’s something about the road to no where that fascinates her.

After she went home, I left the door open to the back bedroom, the fan and lights on since the windows are open to allow the air to circulate. Plus it is the coolest room in the house and I wanted that circulating!

So as Martin sees Andrew out of the corner of his eye int he back room, standing over the little table looking at the oracle decks, with his thumb and index finger on his chin contemplating the oracle cards, he tells Martin to pick one card from each deck for his PrettyMama. When Martin looks to see Andrew full on, Martin hears him say “Poof!” and then, “Haha made ya look!” And Andrew disappears! Martin could hear and feel him laughing. What is that boy of ours like!?

Martin then comes to me with the two cards he picked explaining what just had happened, before he can finally make it out to the patio.

What oracle cards did Martin pick for a message for me from Andrew? He picked the “River” (movement) card from Steven’s deck and Optimism from the other. Martin said, “Rivers of Optimism.” What I also got was that there is finally going to be movement with everything that we have been working on lately and to be optimistic with the work I am doing with “Hern.”

What a wonderful, amazing, son we have and how he works and plays with us still! My Muck is always finding ways to let me know…. 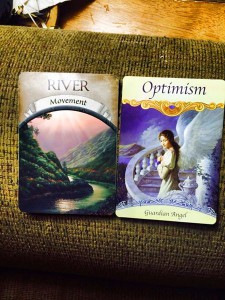 2 Responses to Made Ya Look!