The daughter contacted me to let me know that Marj, a friend she works with, was having a pre-sale garage sale for family and friends, everything 1/2 price. She was wondering if I wanted to go. I could feel Andrew’s energy pushing me, “YES! YES! YES! YOU WANNA GO!” I agreed to go because it would be quality time with the family doing one of Andrew’s all time favorite things, finding treasures and deals at a garage sale.

I have mentioned before how Andrew was an avid dumpster diver, moving in and moving out day, bulk pick up day, garage sale kinda guy. Even as a young kid, as young as 5yo, he would get all excited when he saw a U-Haul truck in front of a house. He knew it meant that people were going to be getting rid of, what he called, treasures. He truly believed that one man’s garbage is another man’s treasure. And those treasures usually ended up in his room! Because of this passion of his, the neighbors got to know him. He hit every garage sale in our neighborhood.

Marj and her dumpster diving husband had a ton of stuff that he picked up that they were hoping to open a store with. Since that wasn’t going to happen, they were having their own garage sale instead. No over head that way and Marj gets her garage back.

I figured I’d find some stuff for our Kalitana (what she calls herself)  Storm Michael, for Christmas. I mean, we might as well take advantage of her being 3 1/2yo while she’s still cheap to buy for. The Dollar Tree is still a hit with her. It was for Andrew too even at 16yo, but he was all about quantity not quality with certain things. He liked the thrill of having so much for so little, even if the item only lasted a day before it broke. He just reminded me that he’d tell me that he got his dollar’s worth out of it. It makes me laugh now remembering him saying that. Thanks for the chuckle Muck!

I have to say, Marj had some pretty cool stuff! I can see why Andrew would get the shakes when he saw a garage sale sign. His motto was, “I might find something I didn’t know I needed!” And he was right!

Something caught my eye soon after we got to Marj’s. It was a Jack The Pumpkin King comforter. For a millisecond I thought about it for Andrew’s room, but then I was in “mama gene” mode and didn’t want to change the comforter he and I bought together right before he was diagnosed with leukemia. Plus I was more focused on shopping for Kalitana Storm Michael before any more drive by vultures stopped and snapped up something I didn’t know I needed!

Once I was done shopping for Miss Kalitana Storm Michael, Elatia, the daughter, says, “What about this Jack The Pumpkin King comforter for Muck’s room.” I told her that I was looking at that, but wasn’t sure I wanted to buy it for the reason I mentioned above.That mama gene loves holding on I tell ya!

Well! Didn’t I feel Andrew’s energy all up in my flava at that moment! He says, “We’re shopping together again now! AND do you actually think I’m actually going to let you leave a garage sale without buying me something!!??” I replied, “Ok! OK! I get it! You’re right! It feels like shopping in the old days, just in the new way. I’ll get it for your room Muck! Geez Dude! Chill!” And then we had a good laugh. A fun mother/son moment. All this was going on in my head mind you as I was gazing into Jack The Pumpkin King’s eyes. It’s easy to get lost in those big black eyes of his. So I paid the $2 for the queen size comforter, that’s right, only 2 bucks, more than 1/2 off, and took this treasure to my car to add to the other treasures I already stashed there from the prying eyes of Kalitana Storm Micheal.

So I put the “new” Jack Skellington comforter on his bed after I cleaned up his bed from the K-Storm spending the night. She had her Uncle Muck’s crystal wands in bed again and all his stuff animals strewed all over the bed. She left her, “The K-Storm was here” mark in her Uncle Muck’s room.

I have to say that the new comforter looks a lot better than the other one. It looks really class.

I wasn’t done yet! I took some pictures of the comforter, BUT that wasn’t all I was hoping to get in the picture. I asked for energy orbs to show up for me and guess what? THEY DID! The pictures are below.

That day we all got treasures to take home. The best one for me was feeling like my whole family was shopping together again like in the old days, it was just in the new way. Andrew showed me that by being willing to let go of the past, ie his other comforter we bought together, I can be open to creating new, present moments with him that will also become fun memories I will remember later too.

Now, did Andrew/PureHeart the Avatar really care if I bought the comforter for his room or not? No. It’s not even on his radar, but I am! He did all that for me. He likes to make his PrettyMama happy and he knows any time I spend with him makes me happy! He honors the fact that I am still his mother while I am still in this “meat suit” and he does what he can to make this very hard journey as a grieving mom, an easier one. He’s a good son! 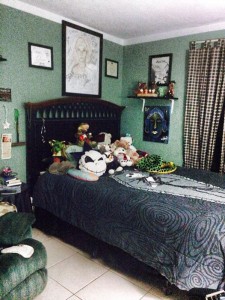 Just the comforter in this shot 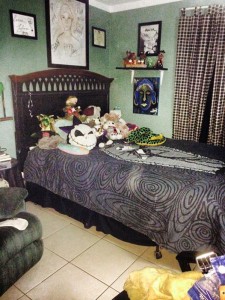 I caught a fly by on the comforter 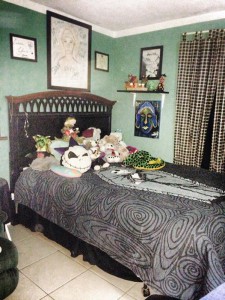 Then caught an orb on the black bed skirt AND another fly by in the top left!!…..Today found another orb! AND it’s a biggie! Didn’t see it last night when I posted it. It’s over Muck’s portrait in the bottom right. How’d I miss that last night? 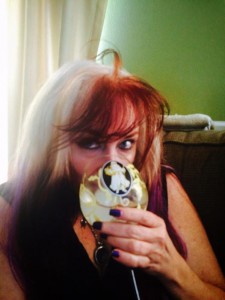 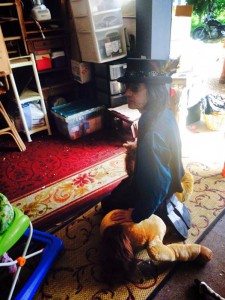 Marts Horsing around at the garage sale. We did not take that home, the horse, we did take Marts home.

One Response to Treasure Hunters