There is a line from the song, “My Sweet Lady” by John Denver that says, “Our time has just begun.” It is the first song Martin ever sang to me in 1988. That is when we saw each other again since 1976 when I was 14 year old. 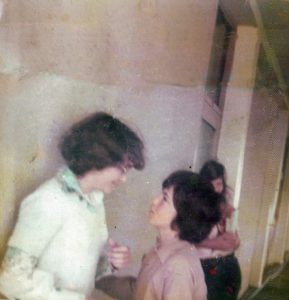 I’m the tall one.

I was getting ready to head back to Florida from Derry N Ireland after my 2 week stay, after being apart for 12 years. Unfortunately my trip was coming to an end, and I was in the bathroom brushing my teeth, listening to Martin sing me this song, with tears streaming down my face.

When I was leaving Martin then, I didn’t know when I was going to see him again, so when I heard him sing, “our time has just begun,” I was hoping he was right. He was right, we did see each other again, on June 11, 1988.

Fast forward 30 years, I was lying with my husband, listening to this song, with my arms around him, stroking his face, kissing his face, as we laid in his hospice bed, knowing it was the last time I would do so. It would be the last time I would have my husband lying next to me in bed. It was a surreal experience. This just couldn’t be happening! Not to my Super Natural Hero, not the love of my life, my husband, my Marts! NO! ABSOLUTELY NOT! Cancer couldn’t be stealing another one of my men from my life! First my 16yo son and now my husband? NO! It can’t be true dammit!

But yet it was.

He didn’t pass at that moment though. He was waiting on one more person, even in his unconscious state. There was still one more person’s voice he had to hear before leaving us physically. His bestie, besides me of course, our 7 year old grand daughter Kaliana. She had been sleeping all day. Looking back I think on some level she was travelling with him and also prolonging the inevitable. The longer she slept, the longer her Daba, her name for him, was here.

When she finally woke up, I asked her if she wanted to sing her favorite Daba’s song, “Only Love Is Real” to him. All Kaliana knew was that Daba was unwell, not passing, not yet. She said yes! I put Martin singing the song on his phone from his https://www.reverbnation.com/pureheartmusic page, and I put my phone with her on video chat by his ear.

So as the love of my life, my bestie of 42 years, was leaving this dimension, and making his way to our son, our real Home, as he took his last breaths, the last thing he heard was himself and Kaliana singing together the first song Andrew gave him after Andrew passed, Only Love Is Real. Kaliana was really belting it out as I helped her with the words. I believe everyone in the room sang the chorus with us.

And that it was.

Our clairvoyant friend Nicola was also there and she saw Andrew standing there in the room.

At the moment M 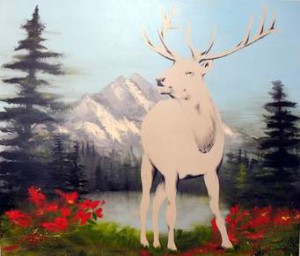 artin passed, she watched as Andrew shape shifted into the white stag, like the one that came for him. Martin climbed onto his back and our son rode off with his father, carrying him Home.

So was our time together just beginning…again? There was a part of me so angry at him for leaving me! Angry hearing those words. Thinking he’s a LIAR! WTF do you mean our time has just begun? Really? I wanted to throat punch Martin and John Denver! But that was the grief talking.

I did get to spend one more night with my husband. Only I laid on a mattress on my sister in law’s 3rd bedroom floor next to my husband who laid in his coffin, looking very handsome I might add. They still do wakes in the house in N Ireland.

The tears streamed down my face as I laid there beside his coffin, realizing that this truly was the last night I would spend with my husband ever this lifetime. The words, “our time has just begun..” kept running through my head while I still fought the urge to throat punch.

Of course there had to be a funny moment, and it happened with our dog Dobby. Martin really loved this dog and Dobby loved him. I lifted Dobby up to see Martin and say goodbye. He licked Martin’s face. In doing so he licked Martin’s eye a little bit open! Here’s me wha? Oh No! His sister Karen quickly sorted Martin out before anyone saw him.

I was surprised how normal Martin felt. Not like Andrew that, 1. didn’t look like himself and 2. Andrew was a cold I never felt before. Andrew was so cold and he felt icky. Martin’s hands were warmer than our daughter’s! lol His face felt amazing, he felt normal really, he looked amazing and so young.

The next morning I tried to shoo off the undertakers. I wasn’t ready dammit! I wanted to take him home, put him the on the couch with his MAC on his lap. He looked so handsome, so healthy actually. But no one would listen to me. Instead they had us say our last goodbye by placing a yellow rose on my beloved before they closed the coffin for the last time, for us anyway. That part nearly took my breath away. Then seeing his coffin being carried out of the house. Things were getting way to real! And I didn’t like it! Not one bit! 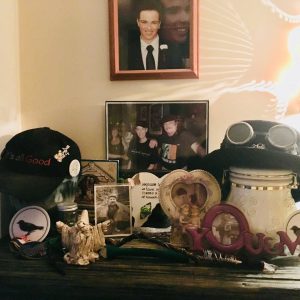 My boyz together in a way I never imagined!

Now it’s a month later and I still think he’ll be coming home. Then it hits me that he really won’t be coming home again. But because of a few experiences I have recently had, I can honestly say that yes, “our time has just begun.” The next chapter, the fourth act if you will, of this play is just beginning. Plays have 4 acts, right?

So while it is harder for me to realize  somethings right now, as I am thrown yet again into deep grief, I do have moments that my boyz remind me…

4 Responses to My Sweet Lady