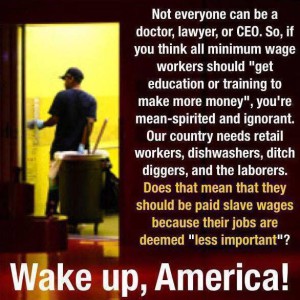 EVERY job is important!

This story is one of the MANY reasons I just adore and love my son’s attitude! He just got shit!

While at All Children’s hospital during the summer of 2007, when my son was first diagnosed with leukemia, this 16yo boy thanked the janitor for cleaning his room after Andrew was ripped from his summer fun to be in the PICU on dialysis and chemo and other aggressive leukemia treatment like needles stuck in his spine etc.

The janitor left my son’s room astonished saying, “That boy just thanked me! He really thanked me!” My son Andrew asked me why the janitor was so surprised that he thanked him, because the janitor had the MOST important job in the hospital! That without him and what he did, the doctors and nurses couldn’t do their job!”Andrew went on to say, “In fact without him, this hospital couldn’t run! So his job is the solid foundation this hospital is built on. His job is really the most important one.”

The night before Andrew passed, on Oct 21, 2007, while wearing a big oxygen mask, medicated, and back in the PICU again, my son thanked that same janitor for the last time!

The janitor asked me what Andrew had said because with the big oxygen mask on his face, all the noise from the equipment in his room, Andrew was hard to understand, and I replied, “He is thanking you for cleaning his room. I want you to know that he really means it and appreciates you. He thinks you have the most important job in this hospital.” The janitor, like all the other hospital workers in that hospital that entered my son’s room, from the janitor, to the people who brought his food, nurses, doctors, vitals techs, they would ALWAYS leave Andrew’s room with a smile AND feeling appreciated. Now that is a true Master Teacher in action! And what an honor and privilege to watch one in action from a front row seat!

That is just one of the many reasons why my son is my HERO and TEACHER! Only Love Is Real! Remember this story the next time you look down your nose at someone else’s job, and remember how much easier your life is, because of them and then thank them!