If you haven’t read the post, “Here We Go Again,” you may want to read that post first, which is below this one.

So, since Martin’s tonsular cancer diagnosis, Andrew has been sending signs all over the place. In Andrew’s defense, he did send signs before the diagnosis as well. That shiny red, expensive Mercedes was a pretty cool one. But he has sent more.

The next day after the diagnosis, while we were out running errands with our K-Storm (our 3 1/2 yo granddaughter,) Andrew sent signs the whole time out, which I deeply appreciate. I do need constant reminders that “IT’S OK.” Cancer is a scary thing to deal with no matter how non aggressive it may be. In the back of your mind is always the, “what ifs.”

The first sign when we came out of one store was the vehicle next to us had a white stage sticker on the back window, I took a pic of it. Ok, maybe not exactly a white stag, but as Andrew says, “work with me here!” But that’s not all. We get in the car and the line in a song on the radio as I turn it on is, “everything’s gonna be alright.” It was “Rock a Bye” by Shawn Mullens. While the song has nothing to do with what we are going through, like being a poor little rich girl in Hollywood, that line in the song certainly does. Let’s face it, tough times are tough times no matter what, and we need to be reassured once in awhile, even a poor little Hollywood rich girl with no self esteem, as well as a grieving twenior mother dealing with yet another cancer diagnosis in her immediate family.

Anyway, Andrew knows I liked that song and I would sing to it on my long drive home to Ft Lauderdale when I use to work in my sister’s salon in Venice Fl on the weekends. When we got in the car it was towards the end of the song where Shawn sings that line over and over again.

The next place we go, the vehicle next to us has 444 in their license plate which means, the Angels are surrounding you now. I didn’t get a picture of that one. Another song came on in the car with the same message, but for the life of me I can’t remember what song it was. Sorry.

It felt like Andrew was out with us running errands the whole time, chatting to us, reassuring us that we have nothing to worry about.

Now a few days later I am at work and Martin is home off of work. He is lying on the couch relaxing when he audible hears in his left ear a voice, a voice that is familiar but older sounding, he immediately knows it’s Andrew’s voice he’s hearing. Andrew says, “hey how’s it going?” in his usual way that he would always do while here. Martin doesn’t move so he won’t break the energy, and answers, “going good, what’s up with you?” Andrew answers, “Just want you to know we’re on it Daddy, and everything is going to be alright.” Martin replies, “I know, and thank you!” And that was it!

Normally when Martin “hears” Andrew it isn’t audibly but in his head instead. I guess Andrew  literally wanted Martin to hear him that he and his posse were on it and there’s nothing to worry about.

Recently we were in Miami working and are staying at a friend’s house. Martin was out in our friend’s gorgeous, very faerie active yard that Martin helped activate, meaning he built a bridge between the Fae and our friends, an introduction to one another if you will. So he has a close connection with the Fae in their yard. Stay tuned for my next post with actual pictures of the faeries in this yard! I will teach you how you too can get pictures of the Fae in your own yard!

While he was out in the yard connecting to the Fae’s energy, he heard one of them in his ear. At first he thought it was a fly or a small bug buzzing in his ear. But then the buzzing stopped and he heard a high pitch little voice say, “we’re on it!” Right after that they gave him a gift for his hat, a beautiful blue feather that looks like it belonged to a bluejay. Those birds totally kick ass! Hmmmm a message perhaps? ;-)

Andrew gave Martin a feather the other day after we were on the Halley Elise Show. We were in the lobby after the show talking with Halley Elise making plans for October events when he hears, “look down out the window Daddy.” Martin looks and there was a single feather. Martin then hears, “it’s for your hat.” Martin immediately got up, went outside to pick it up.

I’m not gonna lie, the first 4 days after the diagnosis were rough. Diagnosis on Tues, my birthday was on Friday. I worked on my birthday, got my ass kicked, didn’t make the money I should have for having my ass kicked, a guy was belligerent to me on top of that. So all these signs have definitely helped! But since leaving for Ft Lauderdale/Miami Saturday night to do our real work with Andrew, it has transmuted all the ick of last week. I’ve decided to celebrate my birthday the rest of this month and make it fabulous!

After all, Andrew is right there when I falter to remind me that…

Everything is gonna be alright! Enjoy! 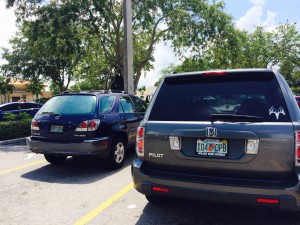 My car on the left, the white “stag” sticker in the right hand corner of the back wind screen of the car next to us