Bright Side of Life

Martin and I were getting off the bus in Derry, N Ireland coming from Belfast after a full day of traveling trying to tie up American  loose ends. As we were getting ready to make our way home, a woman sitting outside a pub with her friend, commented how she loved our look, I believe her exact words were, “I freakin’ love your look!” THEN started singing, “The Bright Side of Life.” Out of the blue! 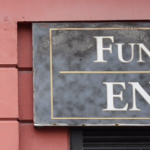 And for those in the know, know that is the song we ended Andrew’s FUNeral service with, so that was a HUGE deal her singing that song.

She said  a few more times how she just loved our look as she continued to sing Bright Side of Life. This really caught my attention. So we had to go over to chat with her to tell her that she had NO idea how cool it was that she was singing that song.

She asked us where we were from. I told her I was from Florida and Martin said Derry. She tells us that she’s from Port Rush, then her friend piped in kidding, “can you get her on the train to Port Rush?” So I was correct in that this was not her first glass of wine, but she was friendly and having a great time in the “big” city of Derry! lol But her saying she was from Port Rush struck me odd, because it reminded me of a story about Port Rush back in the 1980’s when I worked at the Hollywood Beach Hilton in Florida.

I met a couple when I worked at The Hilton as a server in the restaurant in the hotel and we had a conversation. I’m sure I started it since I noticed their Irish accent. I remember talking about having a friend Martin that lived in Derry. Well, whatever I said, they said something to the effect that I would be with Martin, and something about having a great love. This took me by surprise because I was married at the time and had NO plans of going to N Ireland to see Martin.

This couple picked up something about my friendship with Martin. I even hid my wedding ring after they said that, I didn’t want to disappoint them. That happened over 30 years ago so I don’t remember the exact details, but I do remember this couple believing Martin and I were meant to be together.

Our new friend at the pub then said to us, “You two just shine love and light!” Then she said to us, “Love and Light to both of you! Love and Light!” And then she hugged us tight. We had to hug her too because we knew Andrew was working through her. She totally made our day!

As Martin and I started to walk away, I had to walk back and tell her & her friend how profound her singing Bright Side Of

Life was, that it meant the world to us! They both looked at me not quite understanding. I needed them to know that it wasn’t  just a woman enjoying being in the “big city”, but what she did had a lot of meaning to us. 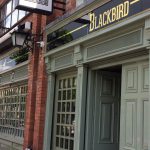 I had to let the m know that “Bright Side of Life” was how we ended our son’s “FUNeral.” A sadness came over them. I told them NO! You singing it was perfect! It was beautiful! AND so deeply appreciated! It meant the world to us and THANK YOU!!

Then I walked away to catch up with Martin. A part of me wanted to stay and join them.But Andrew reminded me later “that just because someone was used to give a message or a sign, you don’t have to be BFFs PrettyMama”

All this happened just after I said to Martin, “I don’t think it has sunk in yet that I am actually living here now.”

But here’s the kicker! It didn’t register with me until we got home what the name of the pub was where this song bird was. Wait for it…wait for it….

BLACK BIRD! Mind officially blown! ANNND how the hell did I miss that one!

And for those in the know, know this is the song Andrew was ALWAYS practicing on his guitar.

You can’t make this shit up people! I love how Andrew worked so hard to let his PrettyMama know, that even through more hard, major life changes…