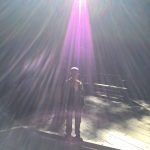 Andrew never got to be a big brother, until now that is.

When  he was in the hospital, thousands of people followed my blog to keep up on Andrew’s progress. One of them was Swati, she fell in love with Andrew. We “met” Swati on an angel board I was very active on because I had worked with the well known author who it belonged to. When Andrew passed, Swati was beyond devastated. She demanded that Andrew come back. Oh yes, she was serious! She fully expected him to listen to her! It still makes me chuckle thinking about it.

She said she would support us and our mission to keep Andrew’s Light shining even brighter, and she has done exactly that and more! She made us rings and engraved them herself. Mine says, “Who’s the PrettyMama,” something Andrew would always say to me. Martin’s says, “I love you Dad.” She has planted a beautiful rose bush in honor of Andrew  for his first birthday not here. Swati sends me a picture every year of Andrew’s rose. She has not only lent her support but has continued to share my son with others, which is the greatest gift you can give a grieving parent, showing them that their child still matters in your own life as well as the parent’s!

Here is what she recently had to tell us: 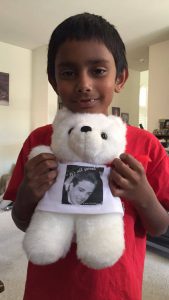 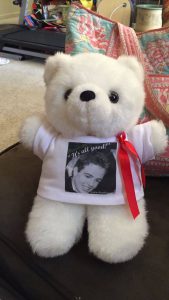 “Dear Connie an Martin,
I wanted to share something amazing about Andrew with you. Connie you know how I have been helping Ujjwal (her son) sleep alone in his room by giving him the teddy bear I bought from you from Cafepress with Andrew’s picture on it? I had told him to ask Andrew and AA Michael to help him sleep and not be scared. I got to know yesterday how much he took this seriously because yesterday we were roaming around in Muir Woods and a woman came and told us that her son was lost. Ujjwal got very worried.

I told him he will be fine. So Ujjwal said, “I know, I have asked Andrew and Michael to look after him”. It touched my heart that he has been talking to Andrew. So I said to Andrew in my mind, “Can you please be his brother, and look after him? He is very simple hearted and does not know how to deal with the world”. Andrew laughed and said, “He will be fine! You worry too much”. Then later I saw beautiful sun rays streaming down, so I made Ujjwal stand there and took his picture. The sun rays turned into a purple funnel of light in my camera – just all around Ujjwal, with a sword of light right above in the funnel. It was amazing!! Like AAM himself coming and reassuring me.

Then this morning Ujjwal told me he dreamt of Andrew last night! I asked him what he saw, he said, “It was like Andrew was living with us. He was my brother, and was playing with me, being with him”. I was speechless! Just last evening I asked Andrew to be Ujjwal’s brother, and I did not tell Ujjwal that I had asked Andrew to be his brother. I don’t tell Ujjwal too much because I want him to have his own experiences, not because I plant things in his mind. So I didn’t tell him what I had asked Andrew. And Andrew replied to my request through Ujjwal’s dream, telling me that he IS going to be his brother, and be with him. 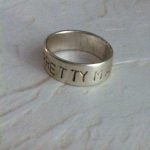 The ring Swati made me

I can’t tell you how touched I feel with this. I have thanked Andrew so many times. Makes me so teary eyed with emotions. Then while Ujjwal was telling me his dream, I told him to let me know if he sees Andrew. Ujjwal sometimes sees spirits and angels etc. With his open eyes, like we see each other. And he cut me off and pointed to the space next to me on the couch and said, “He is sitting there right now”. I can’t tell you how happy I was to hear that. I feel good knowing that Andrew and AAM are so strongly there with my son. Ujjwal has been feeling lonely because his sister left for college. Has cried a few times and told me how lonely he felt. So it felt really lovely to know that Andrew will be his brother, and be with him. I have said thank you to Andrew. But you both too, tell him I said a HUGE thank you for this. It means the world to me. 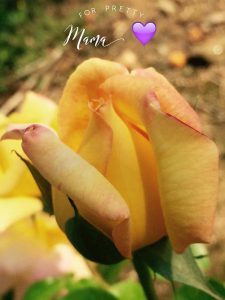 The rose planted for Andrew, which has a funny story itself

I was thinking of you both this morning as Andrew has taken his brotherly job so seriously. Just now when I woke Ujjwal up he told me happily (which is a big deal, because he wakes up grouchy like me. Lol) and said, “Mamma I had trouble sleeping last night for a long time but I am still very happy because I was talking to Andrew. ” I asked him what he talked about. So he said he asked him if he would go biking with him this evening. And asked him what he thought of his Lego and Minecraft creations. Andrew was very encouraging and told him he thought he did a really good job. And then he told him he had a blue bike because Michael painted it blue for him. lol. Then while eating breakfast he smiled happily and said,”I wish everyone knew about Andrew and could talk to him.” I am truly grateful that Andrew is being his brother. Ujjwal missed talking about all this with his sister. But now he has Andrew.”

Well Dear Swati, it means the world to us that you are helping us on our mission to keep Andrew’s Light shiningBRIGHT by sharing our son with your son!

I always knew Andrew would make a wonderful big brother! Whether it was from here or over there…