8th Anniversary Of Our Final Goodbye

When you lose a child, you not only have the day that they passed to get through, you then have the day of their service, or as we called it, the FUNeral service to get through year after year.  And for us, that was our final goodbye to Andrew’s physical presence, the last time I would ever see my beautiful boy physically again this lifetime. Grief, the gift that just keeps on effin giving! Even 8 years later. 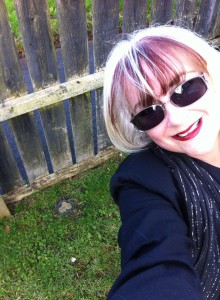 I usually have more pictures of every International It’s All Good Day! celebration, but this year I didn’t get any and only have one that our cousin Chrissy took with someone else’s phone that wanted a picture. WTH is the matter with me? How did I not get more pictures? Maybe because we were premièring our GOOD GRIEF! comediumship show so my focus was else where I guess. And the premier of our new comediumship show went great! It was a small audience, just perfect for Martin to get his medumship groove back after a year, and for me to premier my GOOD GRIEF! comedy part of the show. Let’s face it, a comedy show about your son passing from leukemia is a scary thing to put out there! But Andrew made me write it back in 2013 when we were here in N Ireland during Martin’s recovery from major surgery.  I have been feeling the nudge, push, shove….ok, inspiration Andrew is reminding me again, to finally put it out there. So far it has gone over well. Everyone can relate to grief on some level and if we can find humor in losing a child, then it gives others permission to find humor in their grief as well. After all, laughter is the highest vibration.

Connie writing on the fence

Martin and I decided that we were going to do a ceremony on the 8th anniversary of Andrew’s FUNeral service. Since we are staying at Andrew’s all time favorite place in Ireland, his Uncle Liam’s in Ederowen Derry N Ireland, this seemed like the perfect place for it. After all, this was also where Martin and I began our relationship again back in 1988, and where Martin sang to me for the first time, and he sang “My Sweet Lady” by John Denver. Plus it’s where Andrew would stay when we would come to Derry with  him, hence this being his all time favorite place in N Ireland.

While we have been staying here, a young man from the neighborhood came to the door one day looking for money from Liam for the work he does for Liam. I realized he was around Andrew’s age and might know him, and lo and behold he did! He shared a few funny stories about Andrew, which made my day!

The triple spiral plaque that we got from our friend Jim and Grainne’s Celtic Cart Stall in Derry, N. Ireland

For the ceremony we bought a slate plaque with Martin’s favorite Celtic spiral symbol on it at a local metaphysical vendor in Derry, who are now our friends. We wanted to put the plaque where we had buried some of Andrew’s ashes back in 2007 when we had a memorial here for him. The lavender bush that was planted in honor of him over his ashes has since died from one the winter’s snow. I’m guessing the brutal winter of 2009. We placed the plaque in the ground and I wrote on the fence like a wee head stone, while we played one of Muck’s favorite CDs, “Fairy Of The Woods” by Gary Stadler. I would wake up in the morning hearing this CD playing while Andrew did his school work when he was 9yo. It always reminds me of him and the Fall, which is when I would usually hear it.

Below are the pictures of Martin and I placing the slate plaque where his ashes were buried at Ederowen. But Andrew wasn’t done with us yet! Oh no! He had more signs to give us. OK we asked, OK more like demanded him to, but he delivered! 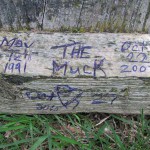 I was sitting in the Richmond Center in Derry today waiting on Martin getting ink for his printer when my mind drifts to my Muck, and our last good bye to him, and how much I miss him. Wishing I could just hug him again. I gaze over at a shoppe window where I see a big golden £22 sign. I see 22’s all of the time, so that wasn’t too heart hitting for me. But then a teenage boy “happens” to walk by me and he has a hoodie on with 1991 across the front. That hits me! The year Andrew was born.

It is amazing to me how we just never know how we can effect people unknowingly. Like the young man who walked by me with 1991 on his hoodie. He was totally unaware that he was used to give me a sign by my son that moved me to tears. It’s very cool how that works. We truly never know how we can make someone’s day without knowing it.

I then say to Andrew as I’m sitting in the mall fighting back some tears because I can feel his energy surrounding me, “So, I’m guessing you are gonna follow that one up with a song, right?” I listen to the mall music, but no cigar…so I thought.

We all walk down to get a taxi and a busker is there. For those not in the know, a busker is a street musician. I see Martin looking at me with that look of “do you hear that?” So I pay attention and I realize that Andrew DID indeed follow up with a song! The busker was singing one of Andrew’s all time fav John Denver songs, “Annie’s Song.” That certainly got my attention! You don’t just hear that song  very often. And the busker was a good singer too!

Well, I just had to go over and tell the busker how much that meant to me and why and how our son used him to give us a sign. Come to find out, he too, like the metaphysical vendors, are “fellow chuckas” and we made another new friend! AND yes, I left some money in his guitar case.

So, Andrew made what would normally be a really tough day, a beautiful one where we felt his energy and love, reminding us that “Only Love Is Real!” 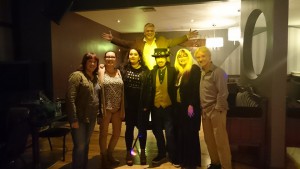 After the GOOD GRIEF! Comediumship Show

2 Responses to 8th Anniversary Of Our Final Goodbye